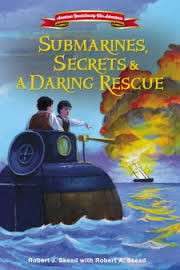 Fifteen-year-old twins, Ambrose and John Clark, find themselves in the service of the newly formed United States of America when they help transport much-needed gunpowder to the patriots. That is, until they have to attempt a prison break to rescue one of their old brothers. It’s hard being a kid when everyone around you are at war.

Why maybe you should read it:

This father/son writing team does a fine job of taking historical facts and weaving a tale of daring feats to capture the adventurous spirits of readers young and old. When I read the Skeads’ first book in this series titled PIRATES, REDCOATS & SPIES, I was immediately drawn into the world of Ambrose and John Clark’s challenge to make a difference during the birth of a new nation. This next book takes readers on another journey as the twins are put in charge of the American Turtle, the world’s first submersible used in combat. With rich literary story telling and accompanying illustrations, the latest book in this Revolutionary War series is sure to be a great addition to any library.
Like-o-meter Rating scale**: 5 out of 5…grab it!