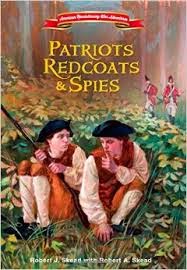 When patriot Lamberton Clark is shot by a British Redcoat soldier, he has only two hopes of getting the secret message he’s carrying to General George Washington: his 14-year-old twin boys. Upon discovering that their father is a spy and express rider for the Culper Spy Ring, the boys accept their mission. They set off to find the General, but the road to the commander in chief of the Continental Army is full of obstacles including the man who shot their father who is hot on their trail.

To someone who is fascinated with the people behind the historical events, I was especially excited to be able to review this book. The Civil War may be my first choice of wars to study, but the Revolutionary War is a close second. The father-son writing team of Robert A & Robert J Snead recreated a time in American history where patriots fighting for the American dream of being in charge of their own destiny came face to face with loyalists determined to retain their ties to their motherland. Add to the mix British soldiers commissioned by England to squash the colonists’ rebellion and it’s almost the perfect adventurous storm for readers interested in learning more about the times leading up to the birth of our nation.

While Ambrose and John are twins, the authors take great pains to create unique personalities for each character. Readers can appreciate how the two feel when they are forced to do things against their moral code in the name of their secret mission. Even when they encounter people determined to prevent them from reaching General Washington, these young patriots remain true to the oath they made, fighting courageously to reach their goal and make their father proud.
PATRIOTS REDCOATS & SPIES is a wonderful book to introduce children to the lives of colonial Americans and the real danger involved in taking up arms in the fight for freedom.