Now on Tuesdays…at least for the foreseeable future…welcome to Flash Fiction Tuesday. In case you don’t know what flash fiction is, it is an extremely short story (sometimes created in 100 words or less) with a beginning, middle, and an ending,

But in my case, I write flash fiction with an open ending. I allow my readers to draw their own conclusion as to what happens. This week’s story tumbles through the produce aisle…
*****************

The sun was just starting to come up when Neil reluctantly let go of his dream. It was the same one he’d had for the past three nights. Molly was laughing at something he’d said, looking at him with eyes the same shiny blue as the morning glories hanging outside the coffee shop where they ate breakfast every morning for the past six years. He stopped eating there because now just the sight of them felt like a knife in his gut.

Neil rolled over and absently reached out for her. His mind knew she was gone but his heart just couldn’t say goodbye. Slowly he opened his eyes as his hand touched where her auburn hair used to curl so softly next to his it would sometimes tickle his nose as he slept. What he wouldn’t give to be tickled like that again. Now there was just a cold, sterile pillow to take up space in that big empty bed.

It had been a year since she left him. A year to curse God, feel the anger well up inside, and endless nights to lie awake fighting back tears threatening to break through the careful wall he built around his aching heart. Well-meaning friends kept telling him it was time to let her go, time to move on, but how could he move on when he couldn’t even remember how to breathe without her?

Shuffling through the kitchen, Neil grabbed a piece of dry toast and his keys as he made his way to the front door. Maybe he should think about moving? Maybe move up north and start over? Or maybe he would just crawl back under the covers and pray for the dream to come again.

Opening the front door, it took him a moment to notice it. Shiny blue flowers caught his eye. There, in the flower bed, Molly made him dig for her last summer, were dozens of beautiful morning glories. Bright blue like her eyes. For a moment Neil thought he was losing his mind. For a moment he almost forgot to breathe and looked around to see who would play such a cruel joke? Then he remembered their last conversation at the hospital as he held her hand and gently moved aside the tubing to kiss her cheek… 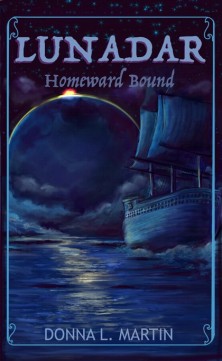 Ruler by day, a reluctant pirate by night, 18-year-old Princess Ariana fights for her subjects in the waterfall city of LUNADAR. In a kingdom surrounded by fairies and mermaids, and ravaged by deadly Drundles, only a chosen few are trusted to guard her daughter, Candra, as the secret heir to the throne.

With Ariana’s world falling apart and the future of LUNADAR at stake, how will she bring her father’s murderer to justice and fulfill a deathbed promise to protect Lunadar’s legacy?

International best selling, award-winning author, Donna L Martin, has been writing since she was eight years old. She is a 4th Degree Black Belt in TaeKwonDo by day and a ‘ninja’ writer of children’s picture books, chapter books, young adult novels and inspirational essays by night. Donna is a BOOK NOOK REVIEWS host providing the latest book reviews on all genres of children’s books, and the host of WRITERLY WISDOM, a resource series for writers. Donna is a member of the Society of Children’s Book Writers & Illustrators and Children’s Book Insider. She is a lover of dark chocolate, going to the beach and adding to her growing book collection. Donna’s latest book, LUNADAR: Homeward Bound (a YA fantasy), is now available in ebook and print form from Amazon, Barnes & Noble, Books A Million, and other online retailers.