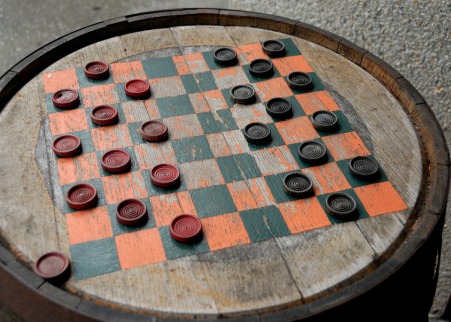 The park was almost empty by the time the old man got there but he liked it that way. No fighting the early morning joggers paying homage to the latest health trend. No new mommas pushing squawking babies in prams to gather at the sandbox like clucking hens guarding chicks. He had timed his stroll perfectly and now he could take a moment to sit. Just sit and watch the leaves turn colors in the crisp Autumn daylight. He had time. He didn’t have to be at the church til later and it wasn’t like Jake was going anywhere.

A breeze started to pick up and the old man shivered. It felt like a cat ran over his grave. Jake would have said it was a black cat hell bent on making his life a troublesome one, but that was the way Jake was. Ornery. Cantankerous. And the best friend the old man ever had.

Right now he would have given anything to have that old cuss chewing on his ear again like he had for the last 45 years. Why, he would even let him beat him at their weekly checker game. But it was too late now for that. The only thing left was a stroll in the park and a moment to recall a lifetime of memories.

Like the time he and Jake went skinny dipping at the old Thompson place. Jake almost bust a gut laughing when the branch broke and his friend plunged into that icy water. Somehow they survived those wild childhood adventures and over the years the bond between them flowed stronger than brother’s blood.

Then came the bombing. Jake shipped out and left the old man behind; a war time reject with a medical history he couldn’t overcome but still they managed to keep in touch. Three long years of waiting and wondering if Jake would make it back in one piece. And then it was like he’d never left. Two peas in the same pod, that’s what they were, and the years just seemed to run together until time caught up to the both of them. Now the old man was content to simply stroll through the park and count the blessings piled up over years.

The sound of church bells brought the old man back from his daydreaming and he clutched his cane tighter as he slowly stood up. It was time now. Time to get to the church and make one more memory with Jake…

Okay, it’s your turn! Why is the old man going to the church? Is he saying goodbye to his best friend or cheering him on to a new life? Put your creative cap on and add a sentence or add a paragraph. Continue my story or start one of your own and leave a comment below…

2 thoughts on “FLASH FICTION TUESDAY: A Wish & A Prayer”