Poor is a state of being. A label placed on those pitiful souls carving out a life on the edges of humanity and hoping one day to discover the secret others seem to keep hidden from them.

Poor is a way of life. A threadbare cloth wrapped around bony shoulders in an attempt to keep the chill away. Scraping together a meager existence, paycheck to paycheck while fighting the wolves at the door.

But being poor can mean something more.

Poor is the key to creativity. When a tablecloth can become a hidden cave full of treasure and a plain cardboard box is the gateway to adventure.

When I was growing up cardboard boxes could morph into many things…cars for dolls to ride in, holes cut for legs so a pretend Cinderella could go to the ball, and super slides before such a thing existed.

One of the houses I lived in had a steep ditch in the front yard that served many purposes when you had only your imagination to work with. Sometimes after a thunderstorm rolled through the area, I would pretend to go fishing in that ditch. But it was the summertime and the call of the outdoors when I enjoyed that ditch the most.

We lived not far from an appliance store that would throw away large refrigerator cardboard boxes once a week. As soon as they dumped those boxes at the back of their store, my siblings and I would sneak a couple home. Ripping them open and laying them flat on the incline of the ditch, we took turns running across the front yard and leaping onto that cardboard to slide down into the ditch. Over and over we would slip and slide until we had quite literally destroyed our slide. No matter…it was back to the store for another box and the fun to begin again.

Funny thing about those boxes. No money exchanged hands for the sake of a little laughter on a warm summer day. No batteries required. No vegging out in front of the television to kill a few brain cells watching endless commercials.

Just fresh air, a little laughter, and some cardboard.

Poor is a state of being. To make of it what you will. To let it help mold the person you are to become but to never define you.

Oh no, never that… 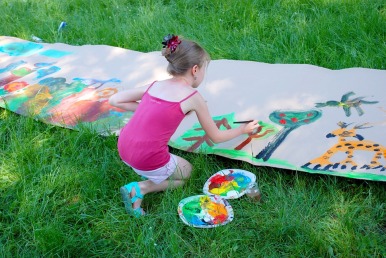 4 thoughts on “TALES FROM THE BAYOU: More Than Just A Cardboard Box”