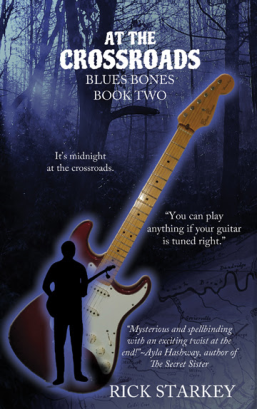 Thirteen-year-old Rodney Becker has discovered the secret of playing every song in the world. Hoodoo!

Rodney’s dream of joining a real band has come true, and the bandleader has already booked their first gig—her cousin’s birthday party. Now, Rodney has a week to learn the most difficult guitar part ever for the birthday girl’s favorite song. Failure could mean his rival, Eddie Manford, taking his place.

Rodney has dabbled with spells before, and he knows there can be consequences. Like losing his voice after trying a spell to help him sing, and a car accident that may take someone’s life. Rodney’s search for a magical fix leads him to a crossroads at midnight, waiting for a man to tune his guitar. Some say the man who shows up will be the devil—coming for Rodney’s soul!

Can Rodney afford to pay the price?

Being born and raised in southern Louisiana, the culture of voodoo is something I’ve heard about since I was a child, but never really paid much attention to the idea. Since moving away from Cajun country, I wasn’t quite expecting to ever hear about it again. Then I got a chance to read At The Crossroads, and was quickly drawn into the possibilities of that world.

In book two of his BLUES BONES trilogy, author Rick Starkey weaves an interesting tale  of music, magic, and one boy’s wish to make a mark on his teenage world. While you don’t necessarily need to read book one in order to keep up with the action in book two, there was an occasional moment for me when I wasn’t clearly understanding the dynamics between some of the characters. I also had challenges with the musical references, but that is merely due to my general ignorance of the technical side of the music industry.

That being said, I thoroughly enjoyed reading about Rodney’s journey into dabbling in the world of voodoo and can’t wait until I can find out what happens next! A nice addition to any home library.

Like-O-Meter Rating: 4 out of 5…think about it!